DID QUEEN VASHTI REALLY HAVE A TAIL? 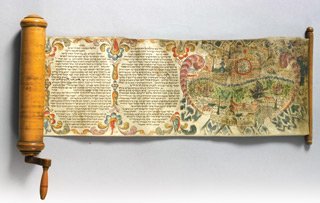 On the Shabbat immediately following Purim, we read Parashat Parah, the section in the Torah that discusses the parahadumah– the “red heifer” that would be slaughtered and then burned, and its ashes then used to purify people and objects that had become tameh(ritually impure).

This section is read as part of our preparation for the holiday of Pesach, when the entire Jewish Nation would need to undergo purification in order to partake in the special pesach sacrifice. Additionally, however, as this special reading takes place right after Purim, we should perhaps assume that it is somehow related to the festive celebration of Purim. What connection might there be between Purim and the parah aduma?

What Was the Queen Hiding?

The opening verses of the Megillah tell of the lavish parties hosted by King Ahashverosh and his wife, Queen Vashti, for the men and women of Shushan. In his drunken revelry, Ahashverosh decided that Queen Vashti should be paraded in front of all the guests, but she refused, and was consequently dethroned.

Vashti, who was famous for her mistreatment of the Jewish maidservants, was very far from a righteous, modest woman. What, then, led her to defy the king’s order? The Megillah tells us that she was an exceptionally beautiful woman, so why did she not want to appear before the men? What did she want to hide?

The Gemara (Megillah 12a-b) cites a startling explanation – that just then, Gd sent an angel that had Vashti grow a tail (!!!), and she was, understandably, embarrassed about her unusual appendage.

This explanation has amused many an elementary school student, and has produced numerous creative cartoons for animated Megillahs, but it begs the obvious question: did Vashti really grow a tail?

Rav Yehonatan Eybeschütz (1690-1764) answers, in a word, no. Queen Vashti did not have a tail. In his view, the Gemara was speaking in allegorical terms.

To explain this allegory, Rav Yehonatan notes the Gemara’s discussion elsewhere (Berachot 61a) regarding the way Havah –
the first woman – was created. One view maintains that Gd originally created a dual human being possessing two bodies attached at the back, one male and one female. He then separated the female – Havah – from the male – Adam – so they would exist as two separate, independent entities. According to the second view, however, Havah was created from Adam’s “zanav.” While the word “zanav” is generally used to mean “tail,” Rav Yehonatan Eybeschütz explains that it is used here as another form of the word “tzela” (rib) – the part of Adam’s body from which Havah was created.

As the rib is a concealed part of the body, Rav Yehonatan writes, it symbolizes modesty. And thus when the Gemara speaks of angel coming along and making Vashti a tail, it means not that she actually grew a tail, but rather that the angel engendered within her (Vashti) the quality of modesty. The angel came and reminded Vashti that the very first woman was created from the ribs, a concealed part of the body, and she should therefore conduct herself modestly. This is what led Vashti to refuse the king’s order.

(Incidentally, the lesson of modesty also emerges from a different aspect of the story in the Megillah. Throughout the section which tells of Ahashverosh’s selection of Ester as his queen, no mention is made whatsoever of her physical beauty. The Megillah speaks of her grace and charm – not her physical attractiveness. Ester earned the king’s affection not through her beautiful appearance, but by her beautiful character.)

The Cow That Inspired

The next piece of our puzzle is a story told in the Pesikta Rabbati, one of our Midrashic texts, of a Jew who owned a cow which he used to plow his field. Unfortunately, this fellow fell into financial straits, and was forced to sell his cow to a non-Jew.

The new owner plowed with the cow throughout the week, and when he took it out to the field on Shabbat, it crouched and refused to work. No matter how many times the man whipped the cow, the cow would not budge.

The man angrily returned to the seller to protest, complaining that the cow refused to work on Shabbat.

They went together to the field, and the Jewish man spoke into the cow’sear: “Oh, cow! When you were with me, you rested on Shabbat. But now that my sins have forced me to sell you to this gentile, please, stand up and do the will of your master!”

The cow immediately stood, all prepared for work.

The buyer then turned to the Jew and said, “I’m not letting you go until you tell me what you said to the cow. Have you bewitched the animal?”

The Jew told him what he said.

The man was shaken, and amazed. He said to himself, “If this creature, which cannot speak and has no intelligence, recognizes its Creator, should not I, whom Gd created in His image, and whom He imbued with intelligence and understanding, recognize my Creator?”

This man proceeded to convert to Judaism and study Torah. He became known as Yohanan ben Torta (“Yochanan son of the Cow”), who was one of the Tannaim (sages of the Mishnaic period).

The Midrash concludes this story by noting that it should come as no surprise that a cow succeeded in inspiring a gentile to convert to Judaism. After all, it was through a cow– the parah adumah– that all Jews who became impure would be purified. By the same token, then, this gentile became “purified” and inspired through the cow he purchased.

The Rema MiPano (1548-1620) said that this cow was the gilgul (reincarnation) of Queen Vashti – and thus had a tail – and Yohanan ben Torta was the gilgul of King Ahashverosh!

If so, then we readily understand the connection between Purim and Parashat Parah! Just as the parah adumah brings purity, the cow in which Queen Vashti was reincarnated brought purity to a gentile farmer, inspiring him to convert and become an accomplished scholar.

Remarkably, the words “zot hukat,” with which Parashat Parah begin, have the same gematria(numerical value) as the words “hamelech Ahashverosh” (“king Ahashverosh”) – underscoring this connection between Ahashverosh and the cow of Rabbi Yohanan ben Torta!